IN THE COURT OF APPEAL OF THE STATE OF CALIFORNIA

Upon ending their marriage, respondent Craig Martin (husband) agreed to pay appellant Cynthia Martin (wife) spousal support for a period of four years. After discovering that wife had remarried, husband stopped paying spousal support and requested reimbursement of the total amount he had paid since her remarriage. The trial court granted husband’s request and entered an order requiring wife to repay $27,000, plus $2,700 in attorney fees. Wife challenges the postjudgment order arguing that husband’s spousal support obligation did not terminate by operation of law upon her remarriage because the parties had agreed in writing that Family Code section 4337[1] would not apply. We agree with wife and reverse the order of the trial court.

I. PROCEDURAL BACKGROUND AND FACTS

Husband and wife married on January 31, 2004, and separated on February 1, 2013. Six months later, husband petitioned to dissolve their marriage, and on December 2, 2013, a judgment was filed using the Judicial Council of California form FL-180 and a seven-page attachment (form SB-12035),[2] which set forth the court’s orders respecting the parties’ agreement. According to form SB-12035, husband was required to pay spousal support in the sum of $1,000 a month, commencing on October 1, 2013 and continuing until August 1, 2017. The parties agreed that spousal support shall not “terminate upon the death of either party or the remarriage of the supported party, or further order of the court, whichever occurs first” when they did not check the box next

to this requirement.[3] The parties executed the necessary paperwork without the assistance of counsel.

On March 7, 2017, husband filed a postjudgment request for reimbursement of $27,000 in spousal support paid to wife after her remarriage in November 2014. A hearing on husband’s request was held on August 18, 2017. Both parties were sworn in. Wife testified as to her understanding that she would receive spousal support for a specific period, from October 1, 2013 until August 1, 2017, and that husband would keep the home and his retirement (“CalSTRS” and “CalPERS”). When asked if they had “used the spousal support as a form of property equalization,” she replied, “Pretty much.” She explained that the period of four years was chosen because “when we met with the man who did the paperwork, that’s what he said, that I would receive the money for half the years of the time that we were married.” Wife’s testimony was not contradicted because husband did not testify.

At the conclusion of the hearing, the trial court granted husband’s request based on its finding that the “language in the judgment [failed to meet] the requirements of the published case law, which require explicit waiver of the automatic or statutory termination by operation of law upon the death of either party or the party receiving support, remarriage.” The court’s order, in relevant part, provides: “Spousal Support was terminated by operation of law by the remarriage of [wife] on 11/27/14. Effective 12/1/14, no Spousal Support was due. Court orders [wife] to pay [husband] the overpaid amount of $27,000.00 within 90 days. Court order[s] [wife] to pay [husband] the amount of $2,700.00 for Attorney Fees as sanction . . . at a rate of $100.00 per month commencing on 12/1/2017 . . . .”[4]

Wife contends the trial court erred in finding that husband did not circumscribe the requirements of section 4337 via the execution of form SB-12035. We agree.

A. The Standard of Review.

B. Spousal Support Terminates upon the Supported Spouse’s Remarriage Absent a Written Agreement to the Contrary.

Section 4337 provides: “Except as otherwise agreed by the parties in writing, the obligation of a party under an order for the support of the other party terminates upon the death of either party or the remarriage of the other party.” Although a written agreement between the parties is required to waive the provision of section 4337, “[n]o particular words are required. [Citation.] On the other hand, silence will not do. [Citation.]” (In re Marriage of Glasser (1986) 181 Cal.App.3d 149, 151.)

C. The Parties May Use Forms Adopted or Approved by the Judicial Council or Local Court Forms to Set Out the Terms of Their Marital Settlement Agreement.

“Practice and procedure in Family Code proceedings are governed largely by Judicial Council ‘Family Rules,’ adopted as California Rules of Court (Title 5, Division 1, [Rule] 5.2 et seq.).” (Hogoboom & King, Cal. Practice Guide: Family Law (The Rutter Group 2018) ¶ 3:200, p. 3-80; see Fam. Code, § 211 [“Notwithstanding any other provision of law, the Judicial Council may provide by rule for the practice and procedure in proceedings under this code.”].) The rules and judicial forms adopted or approved by the Judicial Council for use in Family Code proceedings supersede conflicting rules and statutes. (See Fam. Code, § 211; Cal. Rules of Court, rules 5.2(d), 5.7(a).) Further, local courts may “adopt local rules and forms regarding family law actions and proceedings that are not in conflict with or inconsistent with California law or the California Rules of Court.” (Cal. Rules of Court, rule 5.4.)[5]

We find the trial court’s reliance on Thornton to be misplaced. In Thornton, the stipulated judgment dissolving the marriage required husband to pay $400 a month in spousal support, “commencing May 15, 1997, and continuing until further Order of the Court, death of either party, or for a period until March 1, 2003, whichever first occurs. Said spousal support shall be non-modifiable.” (Thornton, supra, 95 Cal.App.4th at p. 253.) Two days after judgment was entered, husband moved to stay entry of judgment based on the “omission of wife’s remarriage as an event terminating spousal support.”  (Ibid.) No one appeared at the hearing, and the motion was taken off calendar. (Ibid.) Later, after wife remarried, husband moved unsuccessfully to terminate spousal support. (Ibid.) The Court of Appeal reversed on the ground the parties failed to expressly waive the requirements of section 4337. (Thornton, at pp. 254 [“there was no express waiver”], 257 [“If the parties wish to make a written agreement to waive the remarriage provision of section 4337, they must at a minimum expressly state that the supported spouse’s remarriage will not terminate spousal support.”].)

The Cesnalis court questioned the Thornton court’s statement that “‘[i]f the parties wish to make a written agreement to waive the remarriage provision of section 4337, they must at a minimum expressly state that the supported spouse’s remarriage will not terminate spousal support.’” (Cesnalis, supra, 106 Cal.App.4th at p. 1275, quoting Thornton, supra, 95 Cal.App.4th at p. 257.) According to Cesnalis, “this statement goes beyond the requirements of section 4337. Taken literally, this statement would mean that particular words are required to waive section 4337, and that extrinsic evidence has no relevance in resolving whether a written agreement has waived the section 4337 remarriage provision. Section 4337 does not go so far as to require a written agreement expressly stating that the supported spouse’s remarriage will not terminate spousal support. [Citation.] As evidenced by this case, as well as by other decisions . . . , parties can ‘otherwise agree[] . . . in writing’ to waive a section 4337 termination provision without such an express statement. [Citation.]” (Cesnalis, at p. 1276.) We find the Cesnalis court’s analysis of section 4337 and Thornton applicable and persuasive.

Here, in setting forth their agreement regarding spousal support, the parties used form SB-12035, which required them to check a box if they wanted the section 4337 termination provision to apply. The trial court agreed that the form represented “an agreement between the parties.” However, it found the argument that section 4337 does not apply “because there appears to be a check box and it wasn’t checked” to be “a bit disingenuous.” We disagree. Form SB-12035’s check box provides a sufficient “writing” to represent the parties’ agreement to waive section 4337. (Cesnalis, supra, 106 Cal.App.4th at p. 1276.)

Moreover, the contents of family law Judicial Council forms, or in this case a local court form that does not conflict with the Judicial Council forms, “are relevant when evaluating the rights and responsibilities of the parties [citations].” (Faton v. Ahmedo (2015) 236 Cal.App.4th 1160, 1170; see In re Marriage of Kahn (2013) 215 Cal.App.4th 1113, 1116-1119 [default judgment was void to the extent it awarded spouse more than requested because there was no declaration of property filed with the form petition]; County of Lake v. Palla (2001) 94 Cal.App.4th 418, 424-428 [“To the extent inclusion of additional information on the form complaint would improve the process, it is not for the trial court to make such changes to the form’s requirements itself on an ad hoc basis. Any such changes must come from the Legislature.”]; In re Marriage of Sharples (2014) 223 Cal.App.4th 160, 166-167 [discussing distinction between mandatory and optional forms]; In re Marriage of Lippel (1990) 51 Cal.3d 1160, 1169-1171 [mandatory standard forms require the checking of boxes, from a series provided, to indicate the relief requested, and thus the failure to check the child support box in a standard marital dissolution form petition precludes inclusion of child support in a default judgment].)

Applying Cesnalis to the facts in this case, we conclude that husband and wife expressed their agreement to waive the section 4337 termination provision by choosing not to check the applicable box on form SB-12035.[7] By holding that no particular words are required to waive section 4337, Cesnalis impliedly acknowledges the use of Judicial Council forms, or local court forms, is sufficient to set forth the terms of the parties’ marital settlement agreement. When using such forms, the parties check the boxes next to the applicable terms expressly stated; section 4337 does not suggest that any greater specificity is required. Thus, the trial court erred in finding otherwise.

We conclude that as a matter of law, the spousal support order, agreed to by both husband and wife via form SB-12035 attached to the judgment, is not subject to termination by operation of law (§ 4337).[8] In reaching this conclusion, it should be borne in mind that forms SB-12035 and FL-343 leave a lot to be desired. Although these forms contain language that acknowledges section 4337’s termination of spousal support by operation of law, the parties must affirmatively “opt in” to have the statutory requirement apply. However, logic suggests that the parties should affirmatively “opt out” of the statutory requirement in order to waive section 4337’s application. We urge the Judicial Council of California and the local courts to revise their forms so that the parties must specifically check a box to waive section 4337’s application.

The order is reversed. Appellant is to recover costs on appeal. 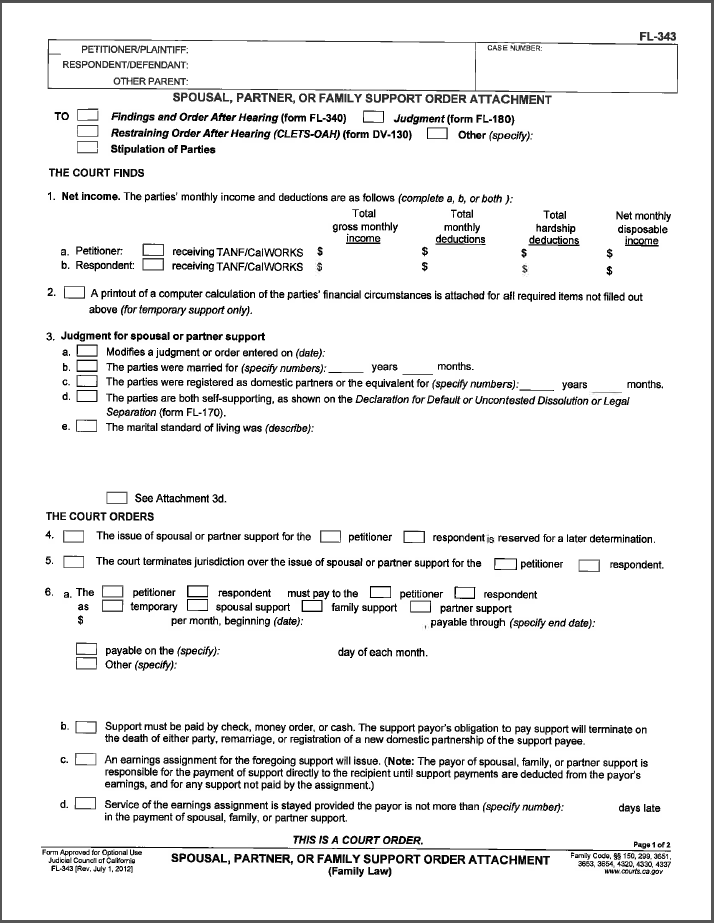 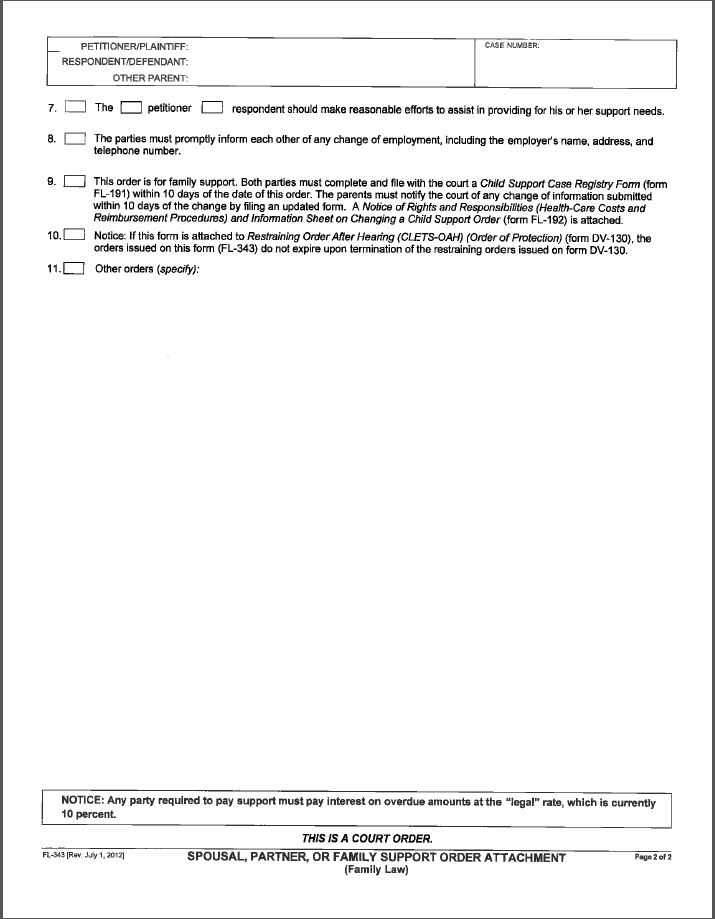